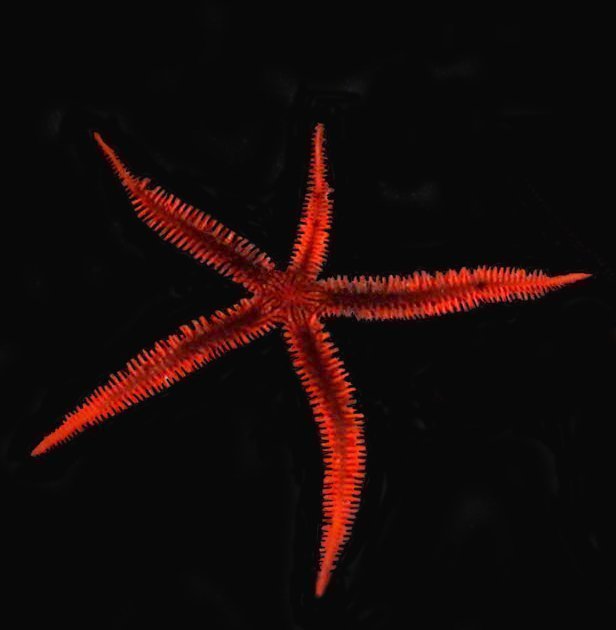 The red brittle starfish, Ophiocoma wendtii, is a fairly common starfish found throughout the keys and South Florida. Like other brittle starfish varieties and some serpent stars, it is a nocturnal scavenger that spends most the daylight hours hidden under rocks, but ventures out to feed at night on detritus.

Brittle stars are close relatives of starfish with a more delicate appearance, it is a starfish with skinny, spiny arms made up with little articulated plates. This starfish also has color-changing abilities. During the day they are reddish-brown to dark brown, at night they are a pale beige with dark stripes. It is believed the reddish color in daylight for UV protection.

Researchers suggest that the entire body of the red brittle starfish is covered with light-sensing cells called photoreceptors. These photoreceptors give visual stimuli to the brittle star, helping it to recognize rocks and hiding places. The researchers placed the red brittle stars in a circular arena in a laboratory. The walls of the arena were white in color with black bars. The red brittle stars would always move towards the black bar. This test replays the day time behavior of red brittle stars when they find dark hiding places in the reef. When they were presented with grey walls making it so no part of the arena was lighter or darker overall, they still moved toward the black stripe, which was centered on a white stripe so as to reflect the same amount of light as the grey.