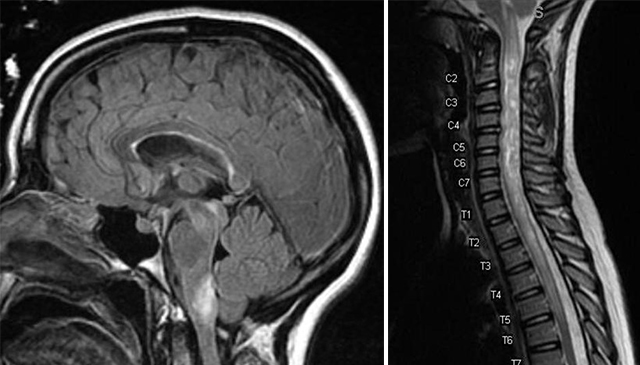 NMO sometimes appears after an infection or can be associated with another autoimmune condition. NMO is often misdiagnosed as multiple sclerosis (MS). The incidence of NMO is up to 10 times higher in females than males.

The damage to the optic nerves produces swelling and inflammation that causes pain and loss of vision; the damage to the spinal cord causes weakness or paralysis in the legs or arms, loss of sensation, and problems with the bladder and bowel function.

NMO is a relatively rare disease, with only 4000 cases in the US, so there are no large-scale studies of treatment. NMO does not appear to respond to standard medication for MS. It is important to correctly identify this diagnosis so that effective treatments can be used early in the disorder.

Treatment for an acute attack of NMO is intravenous steroids followed by oral steroids. If the steroids are not effective, a treatment known as plasmapheresis is used. This therapy cleans the antibodies from the blood by circulating them through a machine, similar to the way a dialysis machine works.

There is always the possibility that a single acute attack could leave someone with a deficit such as blindness, NMO has cumulative effects. Each subsequent attack leads to additional disability.

Prognosis is not good for NMO. Long-term disability and mortality rates are high. In 2019 the food and drug administration had approved three new medications for trials in the treatment of an NMO. These three medications are looking promising, none of the newly approved treatments caused any major side effects in patients with NMO.