Eye tracking technology is a sensor technology that enables a device that uses a computer monitor, a specialized camera and software that can use your eyes to trigger commands and to know exactly where your eyes are focused. It determines your presence, attention, focus, drowsiness, consciousness or other mental states. This information can be used to gain deep insights into consumer behavior or to design revolutionary new user interfaces across various devices.

Nearly 20 percent of people in the U.S have a disability, according to U.S. Census Bureau data, with more than half of those reporting a “severe” disability. That figure is roughly consistent with other countries — in the U.K., for example, 13.3 million people are registered as disabled, which translates to roughly 20 percent of the population.

Against that backdrop, technology companies are pushing to make their services more accessible to those with various disabilities and impairments.

Users who would benefit the most with this technology have conditions such as these:

Major tech companies are working on or acquiring companies that have or are developing eye tracking technology. Across the industry, eye-tracking represents a clear advancement in VR and AR technology.

Microsoft began working on eye control technology in 2011, the team at Microsoft aimed to use Surface 3, Kinect and other Microsoft technologies to give independence to people with disabilities. In October of 2017 released an update that allows Windows 10 users to perform tasks which previously required using physical mouse and keyboard. With native eye tracking support now in Windows 10, users are empowered to use just their eyes to utilize Windows features, including typing and moving of the mouse cursor. The experience requires a compatible eye tracker, like the Tobii 4C, which unlocks access to the Windows operating system to be able to do the tasks one could previously accomplish with a physical mouse and keyboard.

Apple acquired German eye-tracking company SensoMotoric Instruments last year, so this is certainly an area to watch. Apple’s acquisition of SMI is a strong signal that the company is thinking seriously about advanced headset technology – AR and/or VR. It can also be seen as Apple insuring that it is not left behind.

HTC is developing eye-tracking enhancements with 7invensun and Tobii.

FOVE, the first HMD with eye-tracking built in, began shipping developer kits in January of 2017. 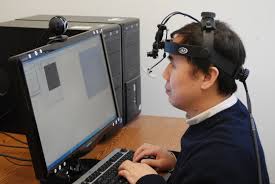